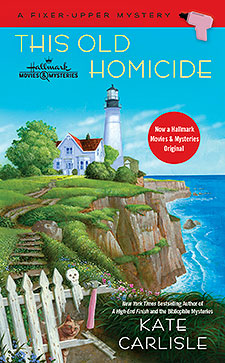 Valentine's Day is approaching, and while Shannon is delighted to be friends with not one but two handsome men, not everyone in town is feeling the love. After her elderly neighbor Jesse Hennessey fails to make his daily appearance at the local diner, Shannon swings by his place to check on him. Not only does she find Jesse dead—of an apparent heart attack—but she also realizes that his home has been ransacked.

Someone suggests that a thief was searching for a priceless necklace Jesse claimed to have retrieved from a sunken sailing ship, but Shannon doesn't believe it. Everyone knows Jesse had a penchant for constructing tall tales—like the one about him having a hot new girlfriend. But his death is soon ruled a homicide, and shady suspects begin popping out of the woodwork. When another victim turns up dead, Shannon is convinced she must find the killer before someone else gets nailed....

"Shannon has her hands full with a mystery that is close to home, not to mention the two hunky men who are vying for her attention. Another winner from one of the leaders in the genre!"
—RT Book Reviews

"Readers will find themselves in love with this gossip-loving community, full of diverse characters and thrilling secrets."
—King's River Life Magazine

Filmed as Concrete Evidence for Hallmark Movies and Mysteries: