The Lies that Bind 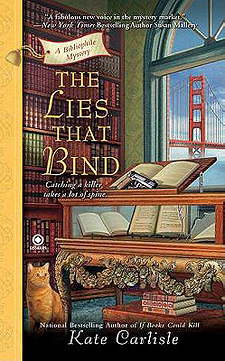 Layla Fontaine, Executive Artistic Director of the Bay Area Book Arts Center, was tall, blond and strikingly beautiful, with a hair trigger temper and a reputation for ruthlessness. Some in the book community called her a malevolent shark. Others disagreed, insisting that calling her a shark only served to tarnish the reputation of decent sharks everywhere.

Since I had business with the shark, I arrived at the Book Center early and parked my car in the adjacent lot. Grabbing the small package I'd brought, I climbed out of the car and immediately started to shiver. It was dusk and the March air in San Francisco was positively frigid. I seemed to be in the direct path of a brisk wind that whooshed straight off the Bay over AT&T Park and up Potrero Hill. Huddling inside my down vest, I quickly jogged to the front entrance of the Book Center and climbed the stairs.

I almost whimpered as I stepped inside the warm interior and rubbed my arms to rid myself of the chills. But looking around, I grinned with giddy excitement. It was the first night of my latest bookbinding class and I, Brooklyn Wainwright, Super Bookbinder, was like a kid on the first day of grammar school. A nerdy kid, of course; one who actually looked forward to spending the day in school. I couldn't help myself. This place was a veritable shrine to paper and books and bookbinding arts, and I had to admit, grudgingly, that it was all due to Layla Fontaine.

As head fundraiser and the public face of the Bay Area Book Arts Center, or BABA as some affectionately called it, Layla had her finger—and usually a few other body parts—on the pulse of every well-heeled person in the San Francisco Bay area. She was willing to do, say or promise anything to keep BABA on firm financial ground, no matter how shaky the legalities seemed. Hers was a higher calling, she claimed, right up there with Doctors Without Borders and Save the Children, and anything was fair game in the nonprofit sector. While that might've been true, the fact remained that Layla Fontaine was a snarky, sneaky, notoriously picky, manipulative bitch.

But Layla had one true saving grace, and that was her pure and abiding appreciation of and devotion to books. She had an extensive collection of antiquarian treasures that she displayed regularly in BABA's main gallery. And miracle of miracles, she'd managed to turn BABA into a profitable enterprise and a prestigious place to visit and contribute one's time and money to.

Most importantly, she had brought me on staff to teach bookbinding classes here, and she'd also hired me privately to do restoration work on her own books. In exchange, I suppose I was willing to give her the benefit of the doubt when it came to her questionable behavior. Yes, I could be bought. I wasn't ashamed to admit it. After all, a girl's got to make a living.

I walked through the foyer where artists' brochures and postcards and flyers and all the local free press papers were stacked, then entered the main gallery. The room was large with a dramatically high ceiling and skylights. Two ramps led down to the lower gallery where glass display cases showed off the best works of the visiting bookbinders and artists. In the center was an unusual mix of ancient art and new technology, including an antique printing press and a large freestanding, eighteenth-century cast-iron paper cutter with a thirty-inch blade. Next to these was BABA's latest acquisition, a computerized guillotine that could cut cleanly through six inches of compacted paper.

The lower gallery was surrounded by the upper level, conveniently referred to as the upper gallery, that ran the perimeter of the room. Here were the main display walls and two large alcoves filled with bookshelves and comfortable seating areas.

To my left, on the main display wall, a number of darkly dramatic, steampunk-style wood block prints were hung. On another wall, tall shelves of beautifully bound books were available to study or purchase.

Off the main room were three long halls that angled off like spokes on a bicycle wheel. Down these halls were classrooms, offices, mudrooms, a number of individual workrooms, the printing press room and several smaller galleries.

She bared her teeth at me. "She's in there and she's in rare form today. Good luck."

"Thanks for the heads up," I said, wondering, not for the first time, why Naomi Fontaine stayed with BABA. She would never get the respect she deserved from her aunt Layla and would always stand in her shadow. Naomi was a true bluestocking who, in another era, might've been just as happy as a cloistered nun. She was pretty in an understated way, and talented enough, but she was a mouse. Shy and a bit obsequious, she lacked the dynamic personality it took to appeal to the high society types with whom her aunt Layla hobnobbed.

Still, it was wise to keep on Naomi's good side. She was the person to talk to if you wanted to get anything done here. If Layla was the brains behind BABA, Naomi was its heart and soul. She had her faults, but everything ran smoothly because of her.

I crossed the gallery and walked down the North hall toward Layla's office. I was anxious to show her the restoration work I'd done on a rotted-out copy of a nineteenth century illustrated edition of Charles Dickens' Oliver Twist. She'd given me the decrepit old book to restore and if I said so myself, I'd done a fabulous job for her.

Layla planned to use the book as the centerpiece for BABA's week-long celebration of the one hundred seventy-fifth anniversary of Dickens' publication of Oliver Twist. She was calling the festival "Twisted." Layla was always throwing lavish parties to celebrate obscure anniversaries such as this one. Anything to drum up sponsors and visitors to BABA.

I was grateful for the work and figured that as long as Layla was willing to provide me with books to restore, I was willing to believe she had a heart buried somewhere in that size Double D chest of hers.

As I reached the end of the long hall leading to Layla's office, I could hear voices, loud ones. Her door was closed but the angry shouts penetrated through the thick wood. I was about to knock when the door flew open. I jumped back and missed being hit by an inch.

"You'll be sorry you crossed me, you bitch," a furious man declared, then stormed out of Layla's office. I stood flat against the wall as a handsome, well-dressed Asian man stomped past me, down the hall, across the gallery and out the front door.

I took a moment to catch my breath, then peeked around the doorway to make sure Layla was all right. She sat at her desk, casually applying red lipstick and looking as if she didn't have a care in the world.

She glanced at me over her mirror. "Of course. Why wouldn't I be?"

"That guy sounded like he wanted to wring your neck."

"Men." She waved away my concern, swept her cosmetics into her top drawer, then stood and rounded her desk. She was dressed in an impossibly tight, short black skirt and a crisp white blouse unbuttoned to show off her impressive cleavage. In her five-inch black patent leather stilettos, she looked like an overeducated Pussycat Doll.

"Give me the book," she demanded.

I hesitated, feeling a bit like a mother wavering at the thought of handing a beloved child over to a stern East German nanny. Yes, the woman might make sure the child was fed, but she wouldn't love it.

"Brooklyn." She snapped her fingers.

I don't know why I faltered. The book belonged to Layla. Aside from that, she was my employer. I exhaled heavily and carefully handed her the wrapped parcel, then had to watch as she ripped the brown paper to shreds to find the Oliver Twist.

"Oh, it's perfect," she said greedily as she turned the book over and back. "You did a good job."

"Thank you." Good? It was a great job. If I said so myself. She'd given it to me in tattered pieces and I'd turned it into a stunning piece of art.

She stared at the elegant spine, studying my work, then she glanced inside and stared at the endpapers. Turning to the title page, she murmured, "No one will ever suspect this isn't a first edition."

I laughed. "Unless they know books."

She glared at me. "Nobody knows that much about books. If I say it's a first edition, then that's what they'll believe."

Then she jabbed her finger at the date on the title page. I tried not to wince but I could see the dent she'd made in the thick vellum. "It says right there, printed in 1838. The year he wrote it."

"Right," I said slowly. "But that doesn't mean anything. We both know it's not a first edition."

Her left eye began to twitch and she rubbed her temple as she leaned her hip against the edge of her desk. "True. But no one's going to hear the real story, are they, Brooklyn?"

Her tone was vaguely threatening. Was I missing something?

Return to The Lies that Bind page