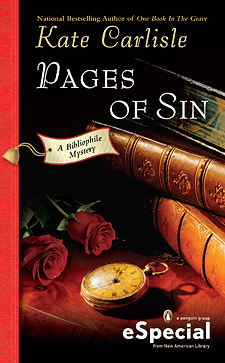 "How do you feel about old books?" my mother asked, clutching a dark blue teapot as she sat down at the table in her spacious, sunny kitchen.

"You know I love old books," I said, holding my mug steady while she filled it with hot, fragrant Earl Grey tea. "Was that a trick question?"

I was staying with my parents for a few days while I taught a two-day book-repair class at the Dharma branch of the Sonoma County Library. Teaching the class had given me the perfect excuse to escape San Francisco while my boyfriend, Derek Stone, was out of the country on a top secret assignment. He's a former British intelligence agent. I don't ask questions.

I'm a bookbinder who specializes in rare book restoration. Old books are my life as well as my livelihood. So I had to wonder what my mother had in mind with that question.

Mom poured herself a cup of tea and set the teapot on a rooster-shaped iron trivet we'd had forever. "A friend wants to get rid of a bunch of old books, but some of them might be in bad shape."

"The moldier the better," I said with a grin. "I'm a sucker for rotted-out leather bindings."

"Then you may be in luck." Mom squeezed a few drops of lemon juice into her mug, then added, "But there's a catch. You have to help me pack them up."

"I don't mind packing them up as long as I get to keep them. Who's giving them away?"

"Do you remember Wanda Frawley?"

"Wanda?" I pictured a pretty, dark-haired woman who always wore a scarf around her neck. "Of course. You used to be great friends with her. I thought she moved away."

"No," she said, not meeting my gaze as she fussed with and straightened the yellow gingham tablecloth.

I frowned. "But I haven't seen her around town in years. Whatever happened to her?"

"Nothing really happened to her." Mom paused. "Well, except that she died recently."

"Oh, Mom." I reached over and squeezed her hand. "I'm sorry. I remember she was always so full of joy. And such a good friend to you."

She returned the squeeze. "Thanks, sweetie. But Wanda and I haven't seen each other in years."

"You haven't?" I was taken aback. I guess I hadn't paid enough attention to my mother's social life. And what did that say about me, her daughter? Guilt blossomed and my stomach began to knot up. "What happened between you two?"

Mom sat back in her chair and wrapped both hands around her mug of tea. "At the time, I thought I must have upset her or something, because one day she just stopped calling, stopped showing up at the Hall, just sort of disappeared. That must have been at least fifteen years ago."

"The Hall" was the Dharma town hall where Guru Bob held regular lectures, philosophical discussions, and parties. Guru Bob's real name was Robson Benedict and he was the leader of the Fellowship for Spiritual Enlightenment and Higher Artistic Consciousness, the commune my parents and several hundred others had belonged to since I was eight years old. While growing up, all of us commune kids had referred to him as Guru Bob. Not to his face, of course, because that would have been disrespectful. Not that it mattered; I figured he'd always known our silly nickname for him. Guru Bob knew everything.

Mom's friend Wanda and her husband, Byron Frawley, had been members of the commune for as long as we'd been living here in the grapevine-studded hills of eastern Sonoma County. Byron was CFO for the commune's winery and a good friend of my father, who ran the place.

"Wanda's sisters must be devastated," I said.

"I suppose they are," Mom said with a sad smile. "According to Byron, Marjorie is having a very hard time, but he has no idea about Elaine. He said he hasn't seen her in over five years."

"Didn't she marry the Duke of Earl or something?"

"He's the Earl of Radisson," Mom said. "She met him when she was on some humanitarian mission in Eastern Europe."

"Right." The three beautiful Bradford sisters, Marjorie, Wanda, and Elaine, were the daughters of extremely wealthy parents. They'd grown up in the area and were considered minor celebrities in Dharma. Everyone in town knew little tidbits about their lives, including me. "She lives in his castle and they have some kind of wild menagerie, right? And she wrote books."

Mom smiled. "Children's books, all about the llamas she raises on the estate grounds."

"Cool," I said, grinning. But then I frowned. "So they had a fight or something?"

"Yes. I remember seeing Elaine in town occasionally, even after she married the Earl. But then she simply stopped coming. I have a feeling the sisters had a falling out. When I asked Byron about her, he seemed to shut down, so I didn't probe."

"That's not like you," I said, biting back a smile.

"I know." She chuckled. "I imagine with a yard full of llamas, she's still as eccentric as she ever was. She and Marjorie were always a wacky twosome."

I wasn't sure exactly what constituted "wacky" in Mom's dictionary, since she was a semipermanent resident of Wacky Town herself. But I did remember the three beautiful Bradford sisters. While I was growing up, they were always showing up on the local news, and since they were so rich, the media called them eccentric instead of just plain odd.

The sisters had always embraced the most radical causes imaginable. I could still recall seeing them at the grocery store trying to collect signatures for all sorts of petition drives. They often carried protest signs. We kids always talked about the funniest ones. Don't Use Toilet Paper (because the companies who made toilet paper also allegedly made bombs) and Bicycle in the Buff for Peace (self-explanatory).

The oldest sister, Marjorie, became even more heavily involved in radical politics. In the nineties, she traveled with a political action group throughout Eastern Europe and parts of the Middle East and the Asian subcontinent. The group would meet up with the local opposition parties and do what they could to help the local underground overthrow whichever dictator was oppressing his people.

Marjorie gained more notoriety when she published a book of her journals and photographs chronicling her more outrageous exploits. That was her first book; since then, she had become world famous for the many travel memoirs and essays she continued to write.

She didn't stop protesting locally either. A few years ago, I'd seen her at the local hardware store thrusting flyers into men's hands as they passed her. A large, colorful banner hanging from a table nearby read, Wax Your Chest to Stop Deforestation. A pink-smocked cosmetician waited patiently at the table with a pot of wax warming over a Sterno flame.

Shaking off the bizarre memory, I said, "Had Wanda been ill?"

"Yes, although some people would argue with me on that point."

"What's that supposed to mean?"

Lost in thought, Mom stared down at her drink for a minute. Finally she looked up at me. "Wanda was agoraphobic."

"Yeah, it was bad. And you know how people can be. There have always been a few who brushed off the fact that she was ill. They called her snooty and antisocial for staying home and not joining the real world."

"So what happened? Did she just stop leaving the house?"

"Pretty much. One day she seemed fine and the next day, she wouldn't answer my phone calls. I took it personally. I didn't know what I'd done, so I drove over to confront her." Mom sighed a little. "She wouldn't come outside, but talked to me from behind the screen door. She looked perfectly fine, all dressed up and wearing makeup and everything. But she couldn't come out on the porch."

"I told her she didn't have to come outside, I'd come inside and visit her. She insisted she didn't have time to visit that day, so I called her the next day, then once a week for months, but she would never call me back. I guess she was too embarrassed. It broke my heart, but I finally stopped calling her."

"So she shut herself off from all her friends."

Mom's lips twisted in a wry grimace. "Not exactly. One day, a few months after I made that last phone call, she called me out of the blue."

"Wow. What happened to change things?"

"Byron built a six-foot wall around their property."

"A wall? That's all it took? Were you allowed to come inside the wall?"

"No," she said slowly. "But for some reason, the wall gave her some sense of security and control over things. After that, she was willing to talk to me on the phone."

I glanced at her sideways. "So, you had a phone friendship?"

"Yes. Then later, when everyone started using computers, we would e-mail every so often."

I had plenty of friends whose only means of communication with me was through e-mail, so who was I to judge? "At least she finally had some contact with the outside world."

"Yes. And thank goodness for online shopping, not to mention the TV shopping networks."

"Right. No reason to leave the house ever." I sipped my lukewarm tea. "How did her husband handle her staying home all the time?"

"Byron has essentially lived his own life, but he's never left her, so that's something." Mom gazed casually at the ceiling. "Of course, he was very close to Wanda's sisters, too."

My eyes narrowed in on her. "I'm hearing something in your voice. What was going on there?"

Return to the Pages of Sin page