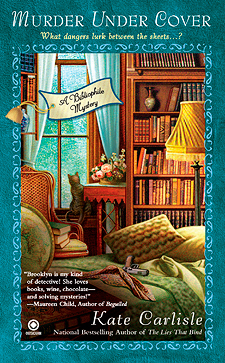 With her latest project, bookbinder Brooklyn Wainwright expects some exciting developments under the cover.

When she receives an exquisite copy of the Kama Sutra from her best friend, Robin, to appraise and restore, Brooklyn Wainwright anticipates re-creating a beautiful book and spicing up her love life. But before Brooklyn can get started, Robin winds up in big trouble: Her apartment is ransacked, and the great guy she recently met lies murdered in her bed. Now Robin is the number one suspect.

Luckily, Brooklyn's boyfriend, British security expert Derek Stone, has moved to San Francisco and is ready to help. And not a moment too soon, because Brooklyn's own apartment is found thoroughly searched. To make matters worse, a bleeding Russian stranger barges in, and the earlier victim is identified as Ukrainian, making it clear to Brooklyn that she's involved in an international conspiracy. Obviously, exploring the Kama Sutra's bliss will have to wait until after Brooklyn finds the killer....

"Brooklyn Wainwright (The Lies That Bind), San Francisco 's bookbinder-cum-crime solver, steps away from her desk again in this smart and intriguing cozy. Steeped in San Francisco culture and characters, including the hippie commune parents and requisite gay and lesbian friends, this beach read has the bonus of spy intrigue built into its plot, and not just in Brooklyn's James Bond-like boyfriend, Derek Stone. BFF Robin has just returned from a trip to India bearing a valuable book for Brooklyn to restore. A handsome Ukrainian guy Robin met spends the night—but then he's murdered execution-style in her bed. Now the bad guys are after Brooklyn too, but why? VERDICT There is a high body count here for a cozy, but rest assured, all killings are done off-scene. A terrific read for those who are interested in the book arts and enjoy a counterculture foray and ensemble casts. Great fun all around!
—Library Journal (starred review)

"I only began reading cozy's last year and Kate Carlisle's Bibliophile mysteries was one of the series that got me hopelessly addicted to the genre. There isn't a single thing about this series that I don't love. From the characters to the unique plot lines, I can't get enough of these books. Murder Under Cover is the fourth book in this wonderful series and I couldn't devour it fast enough. The mish-mash of eccentric characters, from Brooklyn's hippie commune parents to Derek's secret spy past and Gabriel's mysterious origins, will have you feeling like you're visiting with your own friends and family. They will keep you hooked and craving more. As someone who loves books, learning about book binding is just the cherry on top of this perfect sundae. I hope this series has a very long run because I haven't nearly started getting enough of it!"
—Fresh Fiction