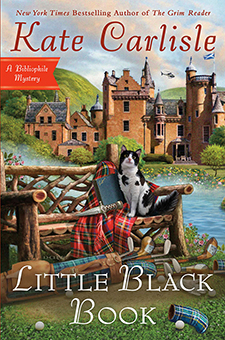 The black book arrived in the mail on a quiet Saturday afternoon.

My husband Derek walked into my workshop balancing a large bundle of letters and parcels in his arms. "We've quite a backlog of mail, darling."

I glanced up and smiled at him. We had been married less than a year so I could forgive myself for wanting to sigh dreamily. I would never grow tired of looking at his ruggedly handsome face with those dark blue eyes and dangerous smile. I simply loved everything about him, even the way he occasionally aimed one inquisitive, raised eyebrow in my direction—how did he do that?—or the way his voice could go all cold and upper-class Brit when dealing with some knucklehead trying to pull a fast one over on him. Of course, that same voice turned rich and warm when he was talking only to me. He was tall and lean and tough and sexy. And he made me laugh every day, which made him even sexier in my book. He was just plain perfect for me.

And somehow, he felt the same way about me.

I blinked. "Oh." Whew, what brought that on? "Um, yeah, looks like the mail really piled up while we were gone."

Late last night Derek and I had returned home to San Francisco from Dharma, where we had spent the last ten days enjoying the wine country, visiting our parents and friends, and checking on the final phase of construction on our new home away from home. It was no wonder we had so much mail.

And so much work to catch up on, I added mentally, staring at the fractured copy of The Adventures of Tom Sawyer spread out in pieces in front of me.

He was still staring at me, his lips twisted in a wry grin. "Are you sure you're all right?"

"Oh yeah, I'm dandy." But I had to take a quick breath and let it out slowly. Sometimes it hit me just how much I loved this guy. And what made it even better was that he loved me right back. I'd probably get used to it in a few hundred years or so. "I guess I'm still a little tired from the trip. And now I've got to finish this book before I do anything else."

"You'll get it done." He kissed the top of my head and we leaned into each other for a brief moment. Then he stepped away and I shook my head to clear my errant thoughts. It was time to concentrate on my work.

I carefully separated the ragged covers of the old Tom Sawyer copy I'd been asked to restore. I planned to replace the faded cloth cover and spine with a sturdy new cloth in deep forest green and then add new endpapers to the inside front and back. The textblock itself was remarkably undamaged, the pages still crisp and clean. Clearly the book had been lucky enough to have escaped the ravages of any children who, in general, had an overwhelming tendency to love their favorite books to death. With a sturdy new outer shell and a little help from me, these pages might last a few hundred more years.

Derek walked around to the opposite end of my worktable and set the piles of mail down. Then he proceeded to sort them into smaller piles.

"Lots of bills," he muttered. "And plenty of junk. Ah, here's a postcard from Douglas and Delia. They're in Santorini."

"I hope they're having fun," I said. Douglas was Derek's oldest brother and a general in the British Royal Army. His wife Delia was lovely and had a wonderful dry wit.

"It seems they are," he said, giving the card a quick scan.

"Alex is doing well, by the way," he said, speaking of our down-the-hall neighbor. "She promises she'll be by shortly with cupcakes in honor of our homecoming."

That got my attention. "Cupcakes? For real?"

"I saw them with my own eyes."

Alex Monroe had offered to collect our mail while we were gone and also to keep an eye on our place. As a former CIA operative, she was handy when it came to security issues. She was also the high-powered head of her own company and enjoyed baking cupcakes to relax. She really was the best kind of neighbor in every way.

Derek set the postcard down on one of the piles he'd created and continued perusing the stack. "Someone sent you a book."

He walked around to my end of the table and placed the excessively taped and padded manila envelope down in front of me.

He chuckled because I was joking, of course. I'm a bookbinder specializing in rare book restoration. I received books in the mail from clients all the time.

I was thankful the envelope was padded because the back was scuffed and dirty and slightly dented from traveling. I turned it over to see who it was from, but there was no individual's name on the return address. Just a company, Gwyneth Antiquities, located in Oddlochen, Scotland.

Derek whipped out his phone, tapped a few icons. "It's a village near Inverness."

Then I focused in on the addressee. "Derek, this isn't for me. It's addressed to you."

"Me?" It was his turn to frown. "How odd. I didn't even look. I could tell it was a book and naturally assumed it was for you."

He took it and glanced around for some way to cut through the layers of packing tape.

"Scissors in the top drawer," I said helpfully, pointing toward my desk.

"Of course." Once he had it opened, he slid the book out onto the worktable. Looking at the title, he said, "Now I'm doubly sure it was meant for you."

I picked up the book. The cloth cover was a stark black. The only thing on the front of the book was the one-word title printed in faded gold and slanted in the upper left-hand corner: Rebecca.

"Rebecca." I flashed him a bright smile. "One of my favorites." I had always been a sucker for gothic novels. The plucky heroine doomed to live a life of drudgery, rescued by the handsome stranger—or is he a killer? Dark and moody, romantic and suspenseful. I had spent my preteen years gobbling them up.

I chuckled at my own thoughts, then naturally turned to the book itself to examine the condition of the front and back covers. That's my job, after all, so it was second nature for me to check out the spine, which showed the same elegantly styled title and the author's name below in simple block letters. I ran my hand along it. The cloth covers of old books had a tendency to separate and sag away from the stiff material underneath, but this spine was still firm and smooth.

I turned the book over again. "Outer corners are slightly rubbed. Spine has a bit of wear at the bottom edge." I pointed out the discoloration.

"The binding is tight, though," I added, standing the book upright on the table. "No wobbling, see?"

"I do, and it thrills me." He leaned over and kissed my cheek.

I laughed. "You need to get out more."

He picked up the book and studied the cover. "Can you fix the discoloration?"

"Of course. But I won't do anything until we find out who sent it to you and why."

"Do you know anyone named Gwyneth?"

"I do, yes. Someone I worked with years ago. But why would she... well, it doesn't make sense."

Opening the book to the title page, I studied the information written there. "Derek, it's a British first edition. First printing. 1938." I turned the page. "And look. It's signed by Daphne du Maurier." I looked up at him. "Wow."

"That is impressive," he said with a nod.

"I'll go through it more closely later, but overall the book appears to be in very good condition. And that signature raises its value significantly." I smiled. "Someone must like you a lot."

"I'm a likable fellow." But his eyes narrowed slightly and that wonderful mouth turned grim as he pondered where the book had come from. He pushed the sleeves of his navy sweater up to his elbows and leaned against the table. "Is there a card or something inside the book that indicates who sent it? And why?"

While Derek studied the front of the manila envelope, I carefully leafed through the book, then held it upside down, gently fanning the pages open so that anything that might've been slipped inside would fall out. But there was nothing. "Is there anything else inside the envelope?"

He checked it thoroughly. "Nothing."

He raised an eyebrow. "Just what we need. Another mystery."

"It's been months since the book festival," I said with a shrug. "We're about due, don't you think?"

The Dharma Book Festival last October had been a huge success and garnered lots of publicity, no thanks to the two murders that had taken place only days before it all began. Happily though, the killer had been caught before a third murder could be committed, and eventually all of our lives had settled back down to normal. Or as normal as we could ever be, given my tendency to attract evil killers and their ilk.

So yes, mysteries and murderous intentions did seem to follow us wherever we went, but it wasn't all my fault. My dear husband was one of the world's top security experts and after all, the book had been sent to him. So for once, this little puzzle was on him. Which was, no doubt, why he was staring at the mysterious book with such a thoughtful expression.

The doorbell rang and we stared at each other.

(Visit the Secret Room to read the rest of Chapter 1!)