All about Lighthouse Cove

As seen seen on the Hallmark Movies & Mysteries Channel

In the small resort town of Lighthouse Cove on the coast near Mendocino, California, everyone knows that the best man for the job is a woman. And that woman is Shannon Hammer, owner of Hammer Construction Company and an expert in Victorian home restoration and renovation. 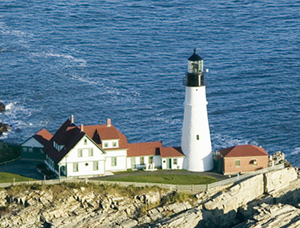 Shannon and her sister Chloe were practically raised on their dad Jack's construction sites. Their best friends were the guys on the crew who took the girls under their wing and showed them the proper way to use tools and machinery. The guys helped the Hammer sisters build cool stuff like a birdhouse and a hope chest, and bought them pink hardhats and pink tool belts.

Life in Lighthouse Cove was idyllic, at least on the surface, with its picturesque harbor, Victorian architecture, charming shops and restaurants, and burgeoning wine industry. But Shannon also experienced firsthand the great divide between the tourists and the townies, leisure class versus working class, rich versus poor. The locals maintained a united front, promoting the illusion of small town bliss, while the city fathers worked behind the scenes to attract big money and power, determined to turn Lighthouse Cove into the most popular destination point on the north coast. 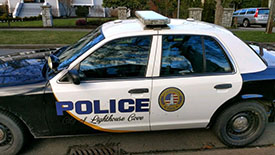 Once Shannon hit her teens, she began taking on her own small construction jobs around town. The locals came to rely on her expertise on everything from a clogged pipe to an electrical problem, to laying kitchen tile or building a new deck. Because of the town's emphasis on the Victorian style, she became an expert, right down to the best type of screwdriver to use on nineteenth century screws. After a few detours, she grew up to take over her father's construction company and these days she's got her own crew to work with. Meanwhile, her sister Chloe left Lighthouse Cove under mysterious circumstances and took her construction skills to Hollywood.

Now Shannon lives alone in her family's rambling Victorian house, while her dad Jack lives in his RV—which is usually parked in Shannon's driveway. She rents out the two apartments over the garage during the tourist season and when she's not restoring Victorian houses, she continues to work on the huge backyard garden that her mother loved so much, giving herb cuttings and flowers to her closest friends to use in their Main Street shops. 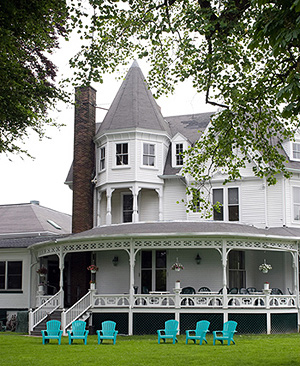 Among those friends is her former babysitter Lizzie Logan, who owns Paper Moon and runs it with her darling husband Hal. The shop specializes in books, stationery, and all things paper.

And there's Emily Rose, who's in her early 40's. She arrived from Scotland with her boyfriend a few years ago. The boyfriend moved on, but Emily settled down. She owns the town's very proper Tea Shoppe on the Town Square.

Soft-spoken Marigold Starling owns the Crafts and Quilts shop, a specialty shop featuring exquisitely made Amish products. Marigold was raised Amish but was eager to leave everything behind and join her incorrigible Aunt Daisy in Lighthouse Cove. She has a direct line to all those Amish creations through her sister back home.

Shannon's oldest friend is Jane Hennessey, who runs the beautiful Hennessey House B&B, thanks to an inheritance from her eccentric grandmother. Shannon has been helping her refurbish the imposing Victorian structure for three years and Jane will open it to the public in a few months.

Despite her many friends, lately Shannon finds herself feeling a little lonely because it's been awhile since she had a special man in her life. But perhaps not for long, as two handsome prospects have recently moved to Lighthouse Cove—Eric Jensen, the new chief of police, and Mac Sullivan, a famous crime novelist with secrets in his eyes. And that's a good thing, because something else is about to show up in this amiable seaside town. Murder. 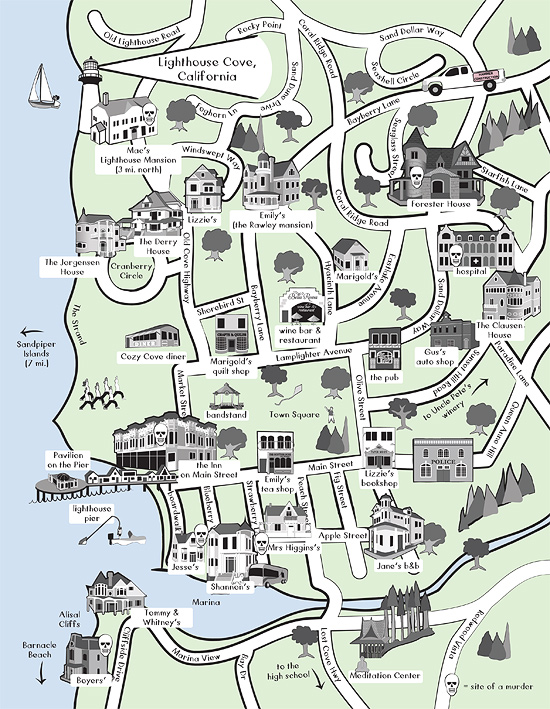 Find a free map of
Lighthouse Cove in the
Secret Room.