Q: Where can I get a complete list of your books?
Here is a link for my complete bibliography. This list is updated every time I announce a new title, usually every six months or so. It’s a PDF that you can download and/or print, or just read on your screen.

Q: How did you get started writing?
I share the whole hair-raising story here.

Q: Will there be more Bibliophile Mystery novels and Fixer-Upper Mystery novels?
Yes—more of both! I recently signed on to write at least two more books in each series, and I couldn’t be more delighted. I hope both series will continue for years to come. One way you can help make sure that happens is to buy each book during the first couple weeks of release, or ask your library to order it for you. Reader enthusiasm sends a message to my publisher that you want more of my books, and I’m so grateful to each one of you who has made it possible for me to live my dream. 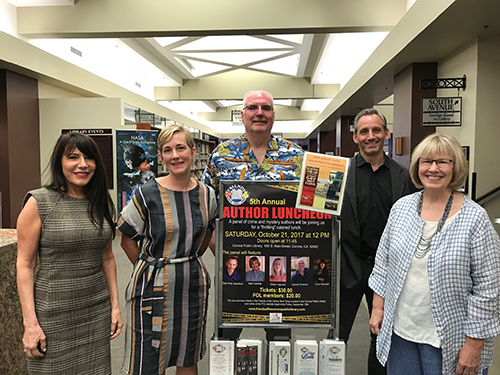 Q: I’d like to meet you. Where can I find a schedule of your book signings and events?
I’d love that! You can find a list of my appearances on the Home page. Book signings are usually booked about a month before each book’s release, so check back when you know I have a book coming out. And finally, if you sign up for my newsletter here, I’ll email you when I’ve got a book signing scheduled.

Q: I have an idea for a book. Can you give me writing advice?
This question does come up frequently, so I’m including it here, but honestly, it’s too big of a question to answer here. The path to publication is different for every writer. There are countless books about writing and publishing; find one that works for you. I do have a few things for you to consider: One, when you’re feeling overwhelmed, remember that every successful writer started where you are now—with an idea and no prior experience. You can do this! Two, there is no right way to write, other than to find the right way for you. That will take experimentation. Try different methods, and incorporate those that work for you into your process. Start now, and write every day for as much time as you can squeeze out of your schedule. Three, the middle of a book is always hard to write. Let me repeat that: The. Middle. Is. Always. Hard. You’ll never reach the end until you get through the middle, so keep writing even when it’s not fun anymore. And finally, read, read, read. Reading is a writer’s training ground. After you read a book for pleasure, read it again to break down why the story worked for you.

Q: Are you a bookbinder?
I’m not, but bookbinding and the book arts in general have been a lifelong avocation. I’m nowhere near as accomplished as Brooklyn, though. I have a couple of bookbinders on my contact list who have been very generous with advice when I need it for one of the Bibliophile Mysteries. I’m also a devoted bibliophile with a small but treasured collection of rare books and first editions. I love books for the stories they tell and the information they impart, of course, but I also love them as objets d’art. A book can be mundane, or it can be fascinating or beautiful. 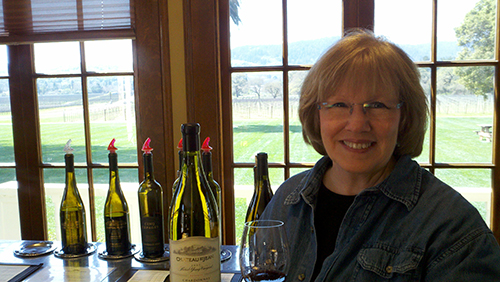 Q: How can I find a bookbinder to repair/restore/appraise my rare book?
There are several bookbinding organizations and companies online (just Google “bookbinders” in your area and you’ll probably get several). They are probably more expensive than you think, but for a beautiful binding, it may be worth it. If you are just trying to salvage a book, you might ask for help from your local library. Many librarians are adept at the quick fix. And if you’re interested in trying to do it yourself, YouTube provides dozens of primers on simple book repair. Good luck!

Q: Is Dharma real?
Only in our hearts. I once lived on a commune, and Dharma is my dream of what it could have become—but didn’t.

Q: Are the San Francisco settings real, such as the Covington Museum and BABA?
I include a mixture of real and fictional settings in the San Francisco scenes in the Bibliophile Mystery novels. If you can’t find it on Google, chances are I made it up. Here are a few of the fictional locations that made it onto the map of Brooklyn’s San Francisco. (The map is available for free to members of my mailing list. Details are in the Secret Room.) 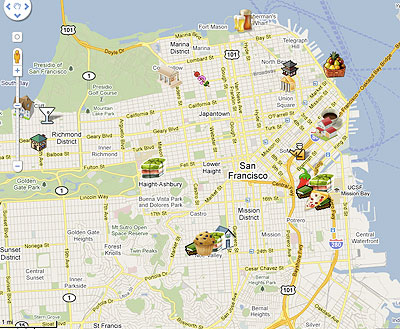 Q: Will the Bibliophile Mystery novels be made into movies?
I would love that! If you know of a movie producer who’s looking for content, please ask him or her to contact my agent, Christina Hogrebe of the Jane Rotrosen Agency.

Q: How many of the Fixer-Upper Mystery novels have been made into movies by Hallmark Movies & Mysteries, and what are their titles? Will there be more?
Three of my books have been brought to the screen by Hallmark Movies and Mysteries, in a series starring Jewel and Colin Ferguson, who do an amazing job of breathing life into Shannon and Mac. This Old Homicide (book) became Framed for Murder (movie). Crowned and Moldering (book) became Concrete Evidence (movie). Deck the Hallways (book) became Deadly Deed (movie). You can buy a DVD set here. 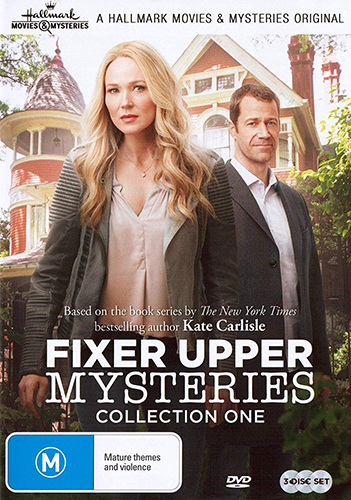 Will there be more? I don’t know. There were some scheduling conflicts that got in the way of filming a fourth movie in the series, and I’m not sure whether the team will be able to reunite. I hope so! Sign up for my newsletter, and I’ll let you know if and when I get any news. In the meantime, there will definitely be more Fixer-Upper Mystery novels heading your way.

Q: What did it feel like when you found out your books were being made into movies?
Like a dream come true. I worked in TV production for years, so I always had it in the back of my mind that I’d love to see my stories on screen. I also felt a little anxious because I was contractually forbidden from telling anyone until I got the go-ahead. For several months, readers would find snippets of news online and would ask me for confirmation, but I wasn’t allowed to answer.

Q: Did you get to visit the set?
I did, and my husband and I even had a cameo in Concrete Evidence. (That’s us below. He’s cute, right?) 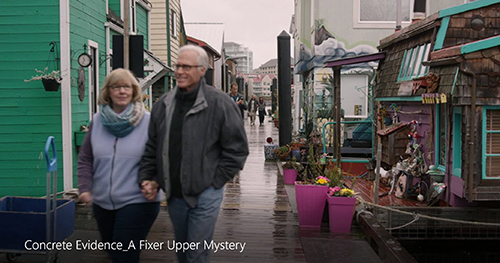 Here’s a picture of me with the cast of the Fixer-Upper Mystery movies on Hallmark Movies and Mysteries. What a joy to spend time with them! They’re all very talented and charming. 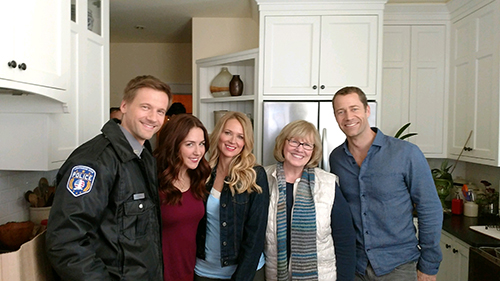 Q: Is Lighthouse Cove real?
Again, only in our hearts. I love Murder She Wrote, and I created Lighthouse Cove as my West Coast homage to Cabot Cove. I came up with Shannon Hammer in honor of my father, who was a home contractor. 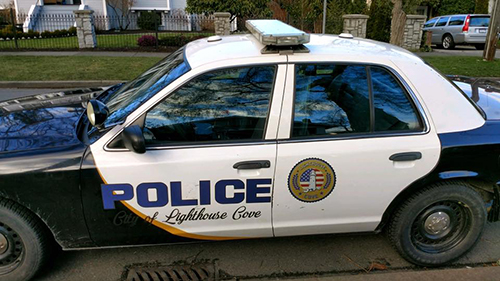