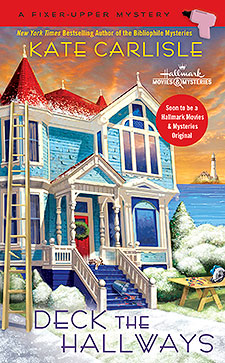 Someone's been slayed! If contractor Shannon Hammer can't nail the real culprit in the St. Nick of time, her dad will wind up in the clink...

Even at Christmastime, Shannon is more spackle than sparkle, which is why she leaps at the chance to transform a grand old Victorian mansion into ten charming apartments for homeless families. Filled with the spirit of the season, all of Lighthouse Cove turns out to help—including her best friends, a troupe of far-from-angelic Santa Claus impersonators, and her father, Jack.

But their merriment is soon dashed by a heated scuffle between Jack and the miserly president of the bank who's backing the project. When the man is murdered, all eyes are on Jack, and visions of prison time dance in Shannon's head. Now, she needs to pull off a crime-solving miracle, before her father's Christmas goose is cooked...

"A cleverly written, charming mystery that will be an absolute delight to readers... (Shannon) is such a sassy, intelligent and resourceful young heroine."
—Moonlight Rendezvous Reviews

"Deck the Hallways is a fantastic holiday read that is filled with charm and suspense. I like that Shannon is a character who doesn't actively go seeking trouble...Because of that, Shannon is one of my favorite heroines."
—Fresh Fiction "Impeccably written...packed full of mystery and excitement, and there was no shortage of fun, and sentiment. An energizing cozy from cover to cover"
—Lisa K's Book Reviews