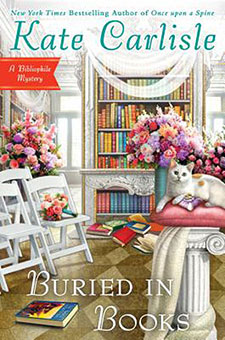 Brooklyn has it all covered. She's triple-checked her wedding to-do list, and everything is on track for the upcoming ceremony with the love of her life, security expert Derek Stone.

Not everyone has been as lucky in love as Brooklyn. Her old library college roommates Heather and Sara lost touch twelve years ago when Sara stole Heather's boyfriend. Brooklyn was caught in the middle and hasn't seen her former besties since their falling-out. When they both arrive in town for the annual librarians' convention and then show up at her surprise bridal shower, Brooklyn is sure drama will ensue. But she's touched when the women seem willing to sort out their differences and gift her rare copies of The Three Musketeers and The Blue Fairy Book.

Brooklyn's prewedding calm is shattered when one of her formerly feuding friends is found murdered and Brooklyn determines that one of the rare books is a forgery. She can't help but wonder if the victim played a part in this fraud, or if she was targeted because she discovered the scam. With a killer and con artist on the loose, Brooklyn and Derek—with the unsolicited help of their meddling mothers—must catch the culprit before their big day turns into a big mess.

"The run-up to San Francisco bookbinder Brooklyn Wainwright’s wedding to security expert Derek Stone immerses her in a librarians’ conference before the ceremony itself unfolds as a race between the minister and the meat wagon."
—Kirkus

"Carlisle does a great job of evoking life in San Francisco through a delightful cast of quirky characters. Her usual blend of humor and mystery will draw in both new and longtime readers. Recommended for admirers of Jenn McKinlay, Lorna Barrett, and Joan Hess."
—Library Journal